Learn how to move smoothly between Parts.

Your journey into learning more about how to leverage the power of the MONTAGE Super Knob continues in this lesson where you will learn about “morphing.”

One of the most important usages of the Super Knob is to morph (smoothly fade) between two (or more) different Parts. In this example, Part 1 is using a Sawtooth wave, while Part 2 is using a Square wave. While Part 1 (Saw) is faded out, Part 2 (Square) is faded in.

Here you can see that:

You can view both of these assignments by touching the DISPLAY FILTER and setting it to “ALL”. (The Display Filter simply changes what you are viewing at the current time.) 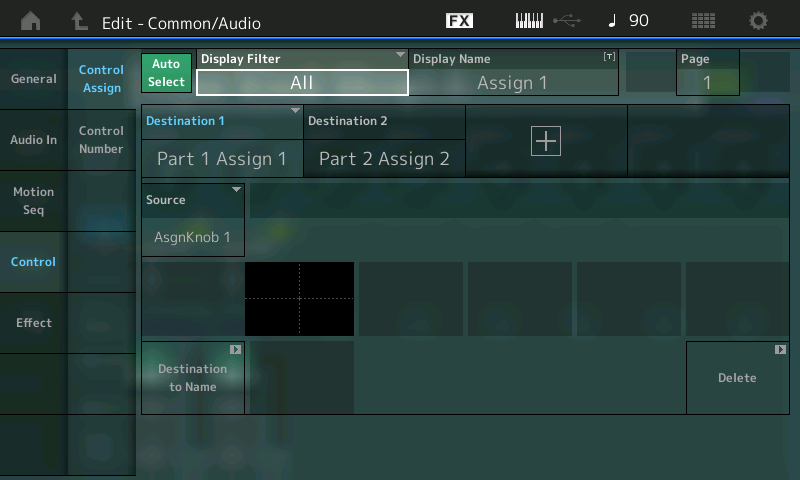 After doing this, the assignments in the individual PARTS can be made. You do so by dropping into PART EDIT. Let’s view PART 1 first: 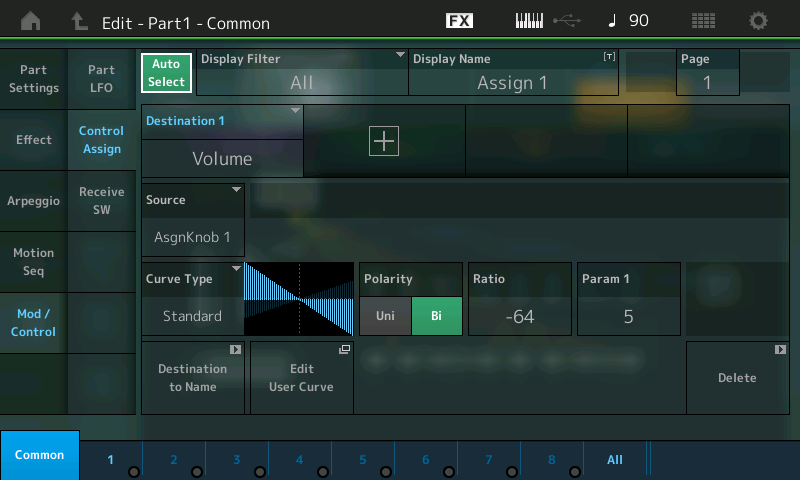 If you move ASSIGN KNOB 1 you will see that:

The graphic shows that as you turn up the SUPER KNOB this PART will be turned down in Volume.

Now when you move ASSIGN KNOB 2, you will see that: 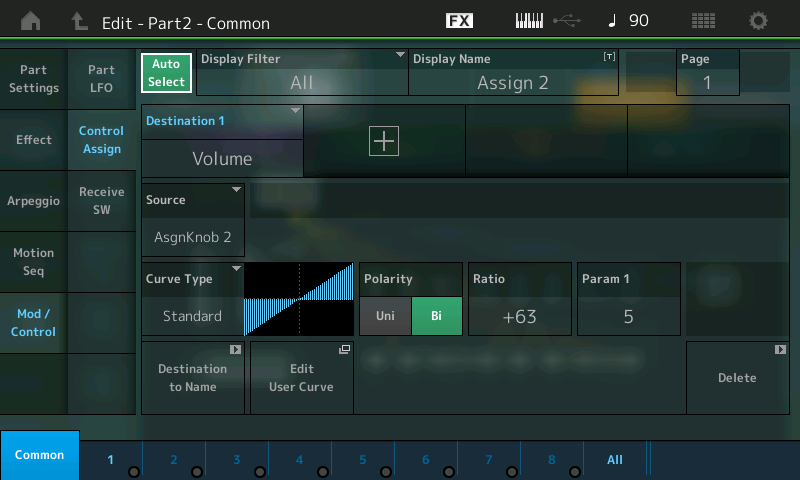 The graphic shows that, as you turn up the SUPER KNOB, this PART (which starts at silence) will be turned up in Volume. In the minimum position, you will only hear the Saw wave; in the maximum position only Square wave; in the center position, a mix of both. These particular examples use the STANDARD Curve Type. This should be easy to follow, hear and understand.

This example is basically the same with a few small changes: The Super Knob starts at 127 (fully clockwise), thus starting with the Square Wave, and morphs to the Sawtooth as you move counterclockwise. The rate of change is different too.

Here you can see that the SUPER KNOB is stored at a value of 127, effectively reversing its application:

This will take you directly to PART 1 Controller setup. Now you can toggle between PARTs 1 and 2 using the PART SELECT [1/1] and [2/2] buttons on the right front panel.

Notice how the application of the controls are being altered by the PARAM 1 setting of “3” (for PART1) versus “7” (for PART2). These determine how fast one PART fades out and the other PART fades in.

Let’s experiment by checking out using different Curve Types to get a slightly different morphing process. For example, set the CURVE TYPE = “BELL“ shape with opposite positive/negative RATIO settings for the PARTs:

This allows you to get the Sawtooth wave at the extremes (top graphic) and the Square wave only in the middle (bottom graphic) of the Super Knob travel.

Another example – the “AM” shape with opposite positive/negative RATIO settings – allows you to switch alternately between Saw and Square as you turn the knob from minimum toward maximum:

Note: Navigating back and forth may, at first, seem to be a chore (because you must select the PART and then move the KNOB in order to view what you want) but as you begin to recognize that each PART has its own set of functions the power of this is revealed. The time you spend navigating and experimenting will be well rewarded as you get used to just how deep “scuba diving” with MONTAGE can get! This kind of access to parameters and controllers is the equivalent of patching analog synth modules together to make a sound and is the first step to understanding the MOTION CONTROL SYSTEM.

For example, you can make the STANDARD Curve Type selection work a bit more smoothly. Set the RATIO = -32 and +32 for Parts 1 and 2 respectively, using the Bipolar CURVE TYPE for both. Set the PARAM 1 = 3 for PART 1 and PARAM 1 = 7 for PART 2. This PARAM will change the CURVE TYPE structure, with the graphic giving you a good indication of what is actually happening.

Explore the PARAM 1 settings to see how it changes the curve. At a RATIO of -32 and +32, and with both set as PARAM 1 = 5, you still get a bit of the PART that fades out when you reach the extremes, instead of silence from the faded PART at the extreme

For Part 1 (fade out of Saw wave) you could use alternately polarity Unipolar with a Ratio of 32, which works especially well if the Super Knob starts with left position.

Catch up on the previous article in the series – “Mastering MONTAGE 4: Super Knob Bipolar” here.