Did you ever have the experience of connecting a bass or keyboard to a mixer and feeling like something just doesn’t sound right? There’s a reason for that. Your instrument — whether it’s an electric bass, electric guitar or keyboard — isn’t happy being plugged into certain types of inputs, even if they use the same connector. The good news is that you won’t need to send your instrument to a shrink! You just need to connect it to the proper input.

As we discussed in a previous Tools of the Trade blog post about connections, the 1/4-inch TS connector found on many mixers (and most electric instruments) can be used for multiple purposes. For example, Yamaha MG Series mixers have 1/4-inch inputs designed to accept line-level signals from devices such as keyboards, electronic drums, music players, DVD or CD players, as well as external effect processors. So, yes, an electric bass or guitar can be connected to a 1/4-inch line input, but that doesn’t mean it’s the optimum connection.

There are three main differences between an instrument signal and a line signal:

1. An instrument signal is much weaker than a line signal, so an instrument requires more gain to achieve the same level.

2. An instrument signal is unbalanced. You can read more about the technical differences between balanced and unbalanced signals in the Tools of the Trade blog posting about connections we mentioned earlier, but one of the important points is that, to avoid noise and interference, unbalanced cables should not be run for lengths of more than about 15 or 20 feet.

3. Almost all electric guitars and basses are high-impedance devices, but line inputs are low-impedance. Impedance refers to how easy or difficult it is for electricity to flow from one device to another at different frequencies, and it’s something that has a huge impact on the sound of an instrument. For example, the pickups of an electric bass are designed to be connected to the input of a bass amplifier, which is also a high-impedance device. When you connect an electric bass to a line input, the pickups do not produce the sound they were intended to. You may experience noise and a loss of low frequencies.

All of those differences add up to this one simple fact: When you connect an instrument to a line input, it won’t sound the way it’s supposed to.

A direct box or “DI” (short for Direct Inject) solves all of these problems. Using a 1/4-inch instrument cable, you connect the instrument to the input of the direct box. Then, using an XLR cable, you connect the output of the DI to a microphone input on your mixer. The mic preamp inside the mixing console can then be used to adjust the signal to a suitable level. (Note: The XLR inputs on most modern Yamaha mixers, including the MG Series, can accept a very wide range of signal levels and for that reason are labeled MIC/LINE inputs.)

A direct box also converts the unbalanced instrument signal to a balanced signal, so you can run it from the stage all the way to the mixer at front of house without any signal degradation.

Finally — and perhaps most important — the DI provides an input with the proper impedance. The instrument acts like it’s connected to an amp and sounds the way it was intended. By the way, pretty much all DIs provide a “parallel” (sometimes called a “through”) output jack so you can simultaneously connect the instrument to an amplifier, allowing you to hear the instrument onstage while also sending it to the mixing board. The illustration below shows how this works: 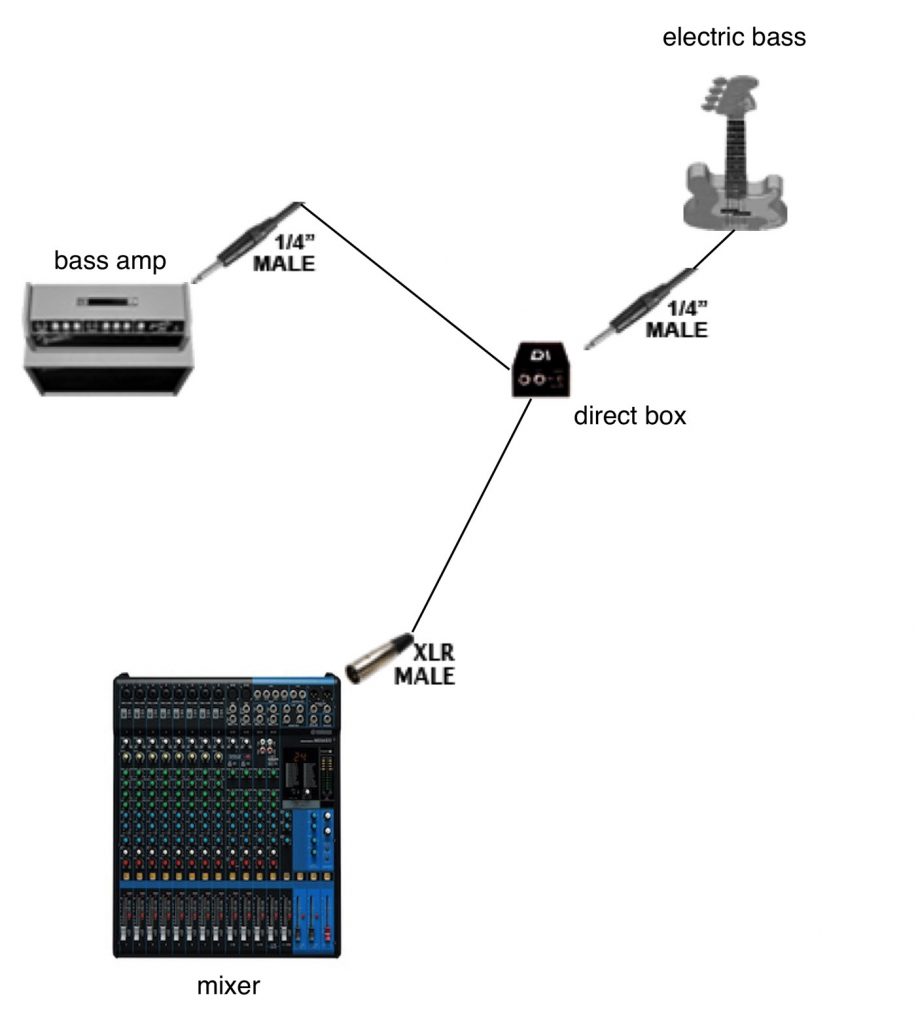 A DI allows an instrument to be connected to both a mixer and an amp.

How Does it Sound?

The sound of an electric bass or keyboard through a DI is desirable because it is clean and typically has a very clear, solid low end. Sending this signal directly to the PA system also means that there’s no need to place a microphone on the instrument amp, and that avoids the issue of other sounds (such as drums) leaking into the mic. (Most electric guitar players prefer to use an amplifier to get their sound, so it’s rare to use a DI on those instruments.)

The output signal from some electronic drums, keyboards, and basses (particularly those with active pickups) can sometimes overload the input of a DI, so most direct boxes provide a pad switch that reduces the input sensitivity to prevent distortion. A pad may also enable the DI to accept the speaker output of an amplifier: 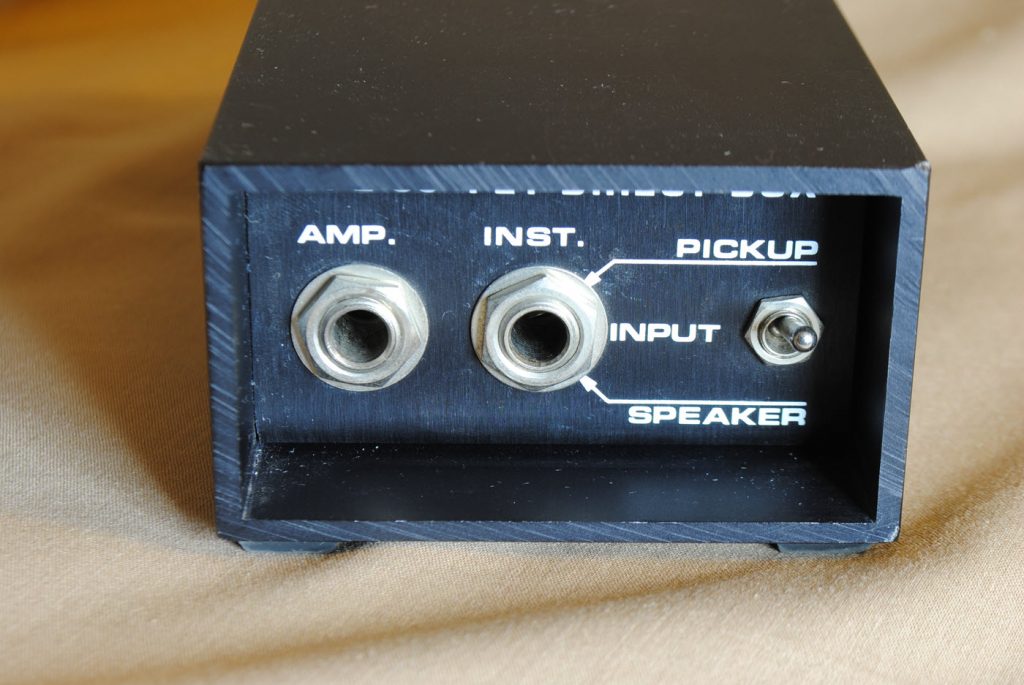 Some DIs can accept an instrument input or an amp speaker output.

In last month’s Tools of the Trade posting,  Cleanliness is King, we talked about the fact that noise can be generated when an audio device is grounded in more than one place. Using a direct box to connect an electric instrument to the PA system and a stage amp at the same time could cause a ground loop, as shown in the illustration below: 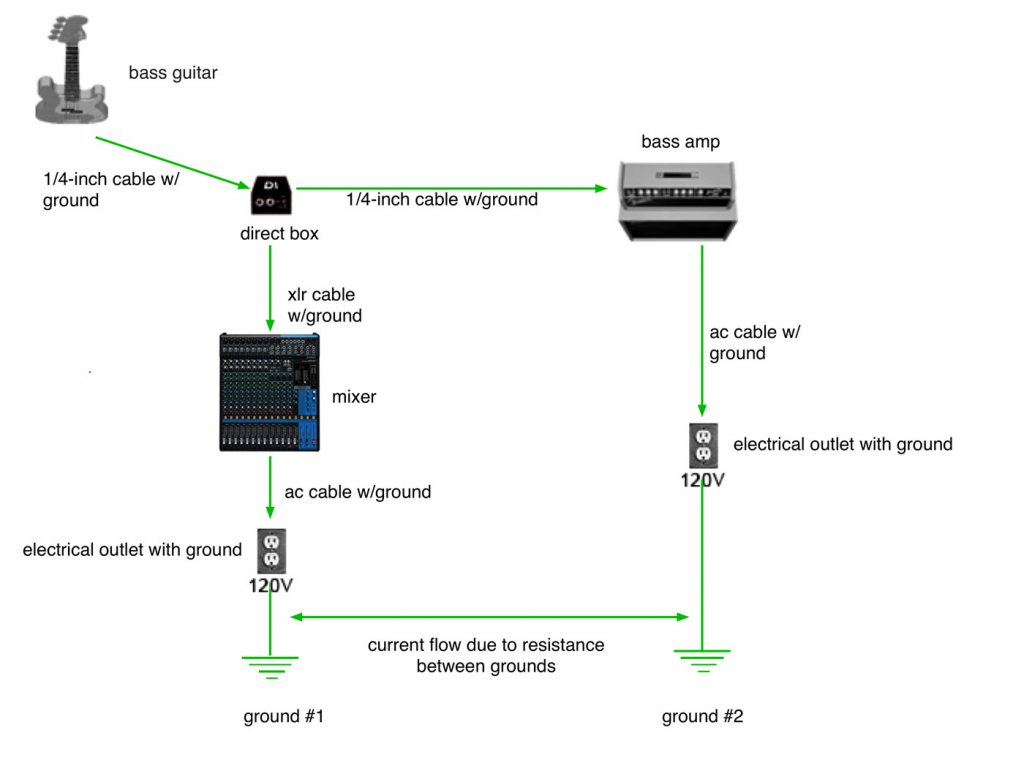 Connecting a bass to an amplifier and mixer can cause a ground loop.

That’s why most direct boxes have a ground lift switch that breaks the ground loop by disconnecting the ground on the XLR output, eliminating the hum that can result from a ground loop: The ground lift switch on a DI can safely break a ground loop.

If you’re not sure whether or not to use the ground lift, try both switch positions and use the one that produces the least amount of noise.

You may have noticed that some mixing consoles, such as the Yamaha EMX7 and EMX5 powered mixers, have a special input with a switch labeled “Hi-Z” — an abbreviation for high impedance. When the Hi-Z switch is pressed, the line input is changed into a high-impedance instrument input, allowing you to connect an instrument directly to the mixer without the sound being altered.

Using a DI will require a few more cables than simply plugging your instrument straight into a mixer, but the benefits are well worth it: You’ll get a better sound and have the ability to easily solve any grounding issues.

All photographs courtesy of the author.