In Part 1 of this two-part series, we looked at ways to make live stereo recordings, which is a relatively easy way of documenting a rehearsal or performance. Unfortunately, stereo recordings don’t give you the option of changing the mix or fixing mistakes that may have been made by the musicians. In this article, we’ll see how multitrack recording can solve these issues and provide you with more professional results.

In a multitrack recording, each instrument or group of instruments is recorded on its own track. You can independently control the volume level, pan position and EQ of each track, as well as selectively add effects. Just as importantly, individual tracks can be edited to fix mistakes or replaced altogether to capture a better performance, plus new tracks can be added to an existing recording — a process called overdubbing.

In order to make a live multitrack recording, you’ll need a recording device that not only offers multiple tracks but multiple inputs as well. (It’s technically possible to make multitrack recordings using one input, but that would require capturing only one instrument at a time and doing tons of overdubbing — something that’s certainly not practical in live performance, or even rehearsal, for that matter.) Some portable or table-top multitrack recorders provide up to 16 inputs, but you’ll get more control over the editing and mixing process if you use a computer running DAW (Digital Audio Workstation) software such as Steinberg Cubase AI, along with a connected audio interface —a device that serves as the bridge between your mixer and computer.

The most versatile multitrack recordings are the ones where each instrument is recorded to a separate track. Many professional studio recordings even go so far as to record each microphone for the drum kit onto a separate track. That kind of setup requires a mixer with a lot of outputs, and an interface with a lot of inputs — but plenty of great recordings have been made on just four or eight tracks (many of The Beatles’ records, for example), and most audio interfaces (such as the Steinberg UR44C, which comes bundled with Cubase AI) offer at least four inputs.

A wide range of analog and digital mixers feature extra audio outputs that can be used to make multitrack recordings while simultaneously feeding a PA system. The Yamaha MG20XU, for example, has four group outputs as well as four aux sends. 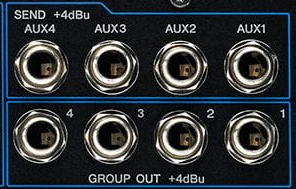 By assigning specific instruments (or logical collections of mic signals, such as all drum mics) to each of these outputs, you can simultaneously record four or eight instruments (i.e., stereo drums, stereo keyboard, bass, guitar, lead vocal, backing vocal) onto separate tracks. 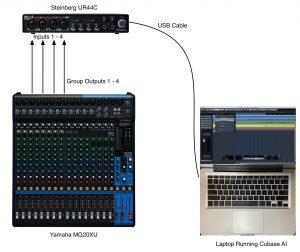 Group outputs from a mixer can feed the inputs of an audio interface.

Direct Me to Your DAW

Digital mixers that have built-in USB have a distinct advantage when it comes to live recording. Yamaha TF Series mixers, for example, provide multichannel USB capabilities, and when connected to your computer, they function as 34-in/34-out USB audio interfaces … meaning you won’t have to buy external interfaces. Each input channel on a TF1 mixer has a “Direct Output” which routes that channel to a computer via USB. These outputs are exclusive for each channel, so only the signal connected to that channel is sent to a track in the DAW. Each TF1 Direct Out can be switched on or off, and can be set “Pre DG” (before Digital Gain) so that the recording is made without any EQ, dynamics or effects, providing much more control in the mixdown process. Steinberg Nuendo Live software is included with TF mixers to make multitrack recording quick and easy. A single USB cable can route up to 34 separate signals from the Yamaha TF1 into a computer.

You’ll be able to go back and fix mistakes because DAW software allows recording on any or all tracks in the session — so if someone plays a wrong note at the start of the second chorus, you can fix that note while leaving the other instruments untouched.

As you prepare to make a live multitrack recording, keep these four caveats in mind:

1. Make sure that only the channels you want recorded to a track are routed to the group or aux send dedicated to that track. This prevents other instruments from “leaking” onto the track.

2. If you use a post-fader aux send or a group to route signal to an input on the interface, moving a channel fader during the show will affect the level of the recorded signal, and that can cause problems in the mixing process. When possible, use a pre-fader aux send instead.

3. Bear in mind that using an aux send to route a signal to an interface input leaves one less send available for stage monitors or effects. If the mixer has six or eight aux sends, this is less of a problem.

4. Try to keep channel processing to a minimum. EQ or compression added to a channel will be included on the recording, which may limit your options to modify the sound when mixing.

– When recording a large number of tracks, try to use a hard drive with a speed of 7200 RPM (or faster) or use a Solid State Drive (SSD).

– Make sure the hard drive is large enough to record the entire show. Each track will require about 500 MB for an hour of recording, so if you plan to record 16 tracks for a two-hour show, you’ll need a hard drive with at least 16 GB of storage.

– Turn off wireless networking and Bluetooth® before you start recording.

One last piece of advice: Give yourself plenty of time to set up before recording a show. Doing a quick test recording during sound check can take a lot of stress out of the process, leaving you to concentrate on your all-important live mixing chores.

Click here for more information about the Steinberg UR44C interface.

Tools of the Trade: How to Use a Compressor
Introducing Steinberg WaveLab 10