Despite his busy schedule as saxophonist for the Dave Matthews Band, Jeff Coffin finds time to educate student musicians as a professor at Vanderbilt University and as a guest clinician throughout the world.

Jeff Coffin remembers listening to AM radio in the car as a child and being attracted to the emotional component of music. In fifth grade, he chose to play the saxophone in the school band program, or rather he believes that the saxophone chose him.

“I think [the saxophone] is very close to the human voice, which is one of the reasons it appealed to me,” says Coffin, a three-time GRAMMY® Award winner.

“I felt like I was able to emulate the voice.”

This initial attraction produced a passion for and a dedication to music that would lead Coffin to an incredible professional career: playing with both Béla Fleck and the Flecktones and the Dave Matthews Band (DMB), forming his own group — Jeff Coffin and the Mu’tet — and teaching music at the collegiate level and in clinics around the world.

In middle school, long before starting his professional career, Coffin wanted to “say goodbye” to his band program and music altogether. “All of my friends were deciding to play sports, which I also did, and I was like, ‘Man, I’m kind of done [with band],'” he says.

His director, Arthur Lagassee, asked him to stay at least through the annual Christmas concert. Out of respect for Lagassee, Coffin stayed and never looked back. “I can’t imagine what my life would have been like had I quit band,” he says.

To keep young students interested in music, Coffin encourages directors to make rehearsals creative and fun. “[Students] want to have something that interests them. Get them improvising immediately. Get them doing call and response and get them listening to different kinds of music. Open them up and talk to them.”

In seventh grade, Coffin began playing with Lagassee’s trio, a defining moment in his musical career. “I got the bug,” he says. The bug was powerful enough to keep him involved in music throughout his high school years and land him in the music education program at the University of North Texas. 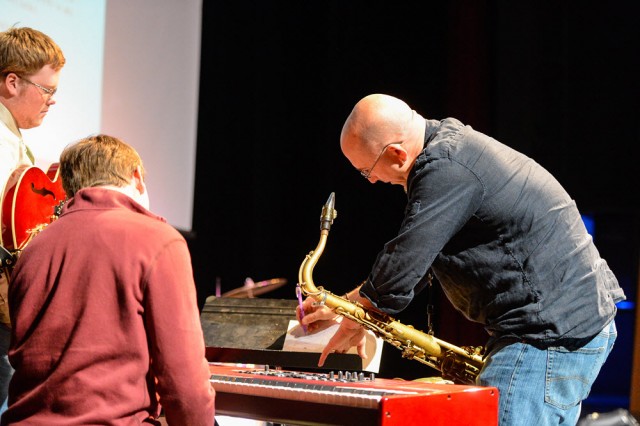 After college, Coffin moved to Nashville, Tennessee, and began running jam sessions while teaching private lessons on the side. As luck would have it, a musician who knew Béla Fleck attended one of these sessions. Impressed with Coffin’s talent, he introduced him to Fleck, who then asked Coffin to go on tour with the Flecktones. Coffin spent the next 14 years as a Flecktone, during which time the group would often open for the Dave Matthews Band. In 2008, when DMB saxophonist LeRoi Moore was injured in an accident and later died, Coffin took his place with the band. “The Flecktones had been taking some time off,” Coffin says, “so, with [their] blessing, I took the Dave Matthews gig.”

During his time outside of these groups, Coffin also started his own band: Jeff Coffin and the Mu’tet — an ensemble that has been comprised of the same people for about 16 years and has recorded 10 CDs. “Being a leader is the most difficult thing I’ve ever done,” Coffin says about the Mu’tet. “I have to deal with all the merchandise, I have to deal with the assistants, I’ve got to deal with management, club owners, booking agents. There’s a plethora of things that I have to do that [the other members do not]. And I have to get up on stage and be the lead guy.”

Despite the difficulty of leading a band, Coffin consistently thinks outside the box and is a true innovator in his professional career. For years, he has used pedals on his horns, just as a guitarist would, to alter the sound of the saxophone and give himself more of a sonic pallet to choose from — because why should guitarists have all the fun?!

The sounds he was able to create with the pedals inspired him to learn a unique skill — playing two saxophones at once. “It’s fun, it’s a cool sound, it’s interesting, it’s experimental, it’s visually appealing to people, but it’s just a tiny part of what I do,” Coffin says.

On the Flip Side

To further his musical expression, Coffin composes and started his own record label, Ear Up Records. The company name derives from Coffin’s belief that listening is one of the most crucial components of musicianship. “The philosophy of the label is that it’s all handpicked by musicians, and it has to do with the artistic integrity, not the commercial potentiality of it,” he says.

In art as in life, Coffin takes advantage of many opportunities for personal growth. In his spare time, for example, he explores his creativity as an avid photographer. This pursuit of personal growth gave Coffin new insights as an educator.

In 2015, Coffin traveled with Caleb Chapman and his afterschool youth band to Cuba to record several big band tunes, resulting in the album “Jeff Coffin and Caleb Chapman’s Crescent Super Band: The Inside of the Outside.” Coffin plans to donate the proceeds from the CD toward musical gear for Cuba’s School of Music at the National School of the Arts.

The nearly 600 students living at the school have very little equipment, Coffin says. “It’s not like they have a bunch of reeds or a bunch of mouthpieces or horns to choose from,” he says. “They get what they get, and that’s what they deal with. They’re incredible musicians, so we want to help in any way that we can with that.”

For teachers who work in schools or with students who don’t have much in terms of musical equipment, Coffin’s advice is that it comes down to the practice and refinement of fundamentals. “Ultimately, it’s not the horn, the mouthpiece, the neck or the reed,” he says. “It’s the passion and understanding that’s behind what’s being played.”

In Coffin’s latest gig as a professor of jazz studies, he teaches saxophone studio lessons and works with the top jazz ensemble at his university. The most important part of his teaching process is talking to his students about what they want to learn in order to tailor his lessons.

“Get to know them as people, not just as students,” Coffin says. “They are fertile minds and are looking for direction and guidance. Don’t make it about you. It’s all about them. There are many ways to reach students, and it’s our job as educators to expand the way we educate to fit the way the student learns.”

When he’s not busy rocking out on stage or in the classroom, Coffin leaves his stomping grounds in Tennessee and travels the world, giving clinics, master classes and lessons. “I involve the students from the very beginning of the clinic, and we talk about a wide variety of things — from why we do long tones to the aesthetic nature of music and how it relates to us as sentient beings,” explains Coffin. During these sessions, he encourages a lot of questions. “I try to get the students to be curious and to draw ideas and concepts out of what I present to them,” he says. “I basically allow them to be creative in their thought process and to provide a safe space for them to ask questions — no matter how ‘far out’ those questions might be.”

These clinics have given Coffin the opportunity to travel off the beaten path to unique places, including Havana, Cuba, and Tuva, a republic of Russia located in southern Siberia. “I’m really fortunate that music has taken me to a lot of very unique and unusual places around the globe,” he remarks. “I’m very thankful every day for that.”

For students wishing to pursue a career in professional performance, Coffin says that fundamentals are key. His three-volume book, The Saxophone Book, discusses what Coffin calls “The Big Five” of fundamentals: listening, tone and dynamics, articulation, rhythm and time, and harmony.

Through his presentations and in his university classes, Coffin feels he learns as much as he teaches. “We are there to learn together, and I feel that I am a student most times, and they are the teachers,” he reports. Yet even as a prominent performer and educator, Coffin will always consider himself to be, above all, a student. “Stay open and realize that you have a lot to learn,” he says. “The moment you stop being a student is the moment you need to stop teaching.”

This article originally appeared in the 2017 V3 issue of Yamaha SupportED. To see more back issues, find out about Yamaha resources for music educators, or sign up to be notified when the next issue is available, click here.