Kenneth Tse: Master of the Saxophone

While growing up in Hong Kong, Kenneth Tse relied on his inner drive and unyielding love of music. Since then he has risen to international prominence in the saxophone world.

When Dr. Kenneth Tse joined band for the first time at the age of 13, he wanted to play the trumpet; however, he was told that he had the right hands and teeth for making an ideal sound on the saxophone.

Only later did Tse find out that the band director had simply needed a second alto player.

That director must have been on to something though, because Tse has since emerged as one of the most renowned sax players in the world today. 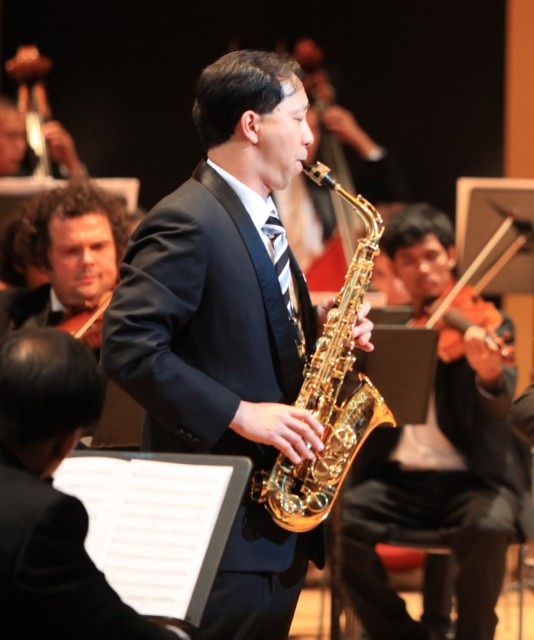 Growing up in Kowloon, Hong Kong, Tse was influenced by a musical family. His mother was a music teacher who encouraged Tse to play the violin and piano.

With the saxophone, Tse was self-taught for much of his early career. “I just really enjoyed music and playing saxophone, playing in band with all my friends,” he says.

Not limiting himself, he listened to all kinds of music — singers, orchestras, piano, cello — anything he could get his hands on. Without a saxophone specialist to teach him the intricacies of his instrument, Tse relied on his ear, spending hours with saxophone recordings and emulating what he heard.

“I would try to mimic the feel of a song by playing my own instrument,” he explains. “One of the hardest things to do was the diminuendo. I would try a bunch of things until I finally got it to sound the way it did on my recordings.” Through it all, Tse never felt discouraged. He would come home from the Hong Kong Academy for Performing Arts, where he studied for two years after high school, and practice for hours.

“I was only one of two saxophone majors at the Academy,” he remembers. “We only had clarinet teachers — [there were] no saxophone teachers — so they could only teach us basic things for our instrument. They also only had an orchestra, no concert band, so we didn’t usually get to play with an ensemble. But I never got discouraged.”

Tse can’t articulate what drove him to work so hard; he just chalks it up to his own love of music and routines engrained into him from playing various sports alongside pursuing his musical interests. Yet throughout the years, he never felt too concerned with where he was headed as a musician. And eventually his hard work paid off. World-class saxophonist and teacher Eugene Rousseau hosted a master class in Hong Kong, and Tse was invited to perform for him. Rousseau was impressed with what he heard, and Tse — after seven years of self-tutelage — finally found a dedicated saxophone teacher.

Tse studied with Rousseau for five years at Indiana University, where he earned a bachelor’s degree, master’s degree and Artist Diploma. Tse later earned a doctorate from the University of Illinois, Urbana-Champaign.

“I was always very much inspired by [Rousseau’s] playing,” he says. “His teaching style and my learning style worked very well together. I was used to fixing my technical issues on my own; Rousseau never tried to control my learning, forcing me to do this or that, because I did it all myself. He would teach me the musicality [and] helped me refine my sound.”

With a New York Artists International Award and a critically acclaimed debut recital at Carnegie Hall in 1996, Tse was hailed as a young virtuoso. Since then, he has been a prolific performer, traveling around the world for dozens of concerts every year. 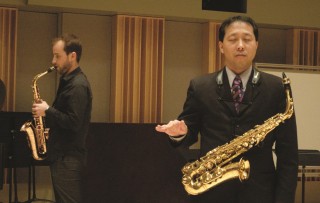 In addition, Tse has embraced the world of teaching. He notes that his self-tutelage, combined with Rousseau’s refinement of his musical style, helped him define his teaching style, giving him the drive and motivation to benefit prospective musicians in the same way that he was helped in his college years.

“I enjoy the responsibility, and because I struggled as a young man without a proper teacher, I had to find out a lot of things by myself,” he explains. “Through that process, I think that I’ve gained a lot of experience, and I felt that I could help a lot of people with their own issues. That’s my mission.”

Currently, Tse is professor of saxophone at the University of Iowa. Though he enjoys a rewarding teaching career, Tse puts a great deal of value in staying active as a performer, both to improve his own musical talents and to demonstrate to his students that performing and teaching are equally important.

“Your students need to see that you’re not just lecturing to them; you’re going out and doing the things you tell them to do,” Tse says. “I need to keep myself sharp, and I can only do that by performing regularly. It may take time away from them, but in a way, it gives time back to them as well because I’m still learning. If I’m learning, I can pass that on to my students, and they’ll learn what I’ve learned.”

“I wasn’t born a natural leader, and it doesn’t come easily,” he confesses. “However, just from working with a lot of friends and enjoying it, I’ve gained a lot of support. A lot of times you don’t really choose to be there, but people put you there because they trust you and your work. I’m very grateful for that.”

Central to Tse’s iconic sound is his saxophone; in fact, he has used just three horns on a regular basis. His first horn throughout high school in Hong Kong was a dull, rusty instrument. Eventually, Tse decided that he wanted something newer, to match the shiny, well-kept horns his peers had. The horn he chose and used for 25 years was a Yamaha. “I played it, and I just fell in love with the sound,” he reports. “I actually used that horn until just this year, as a matter of fact.”

Tse recently began playing on a new Yamaha model and carefully considers how his horn affects his sound. “The majority of the sound comes from the player; that’s what I believe,” he says. “Nonetheless, how well the instrument is designed does affect intonation and timbre a significant amount, and it can really make or break your sound. Yamaha horns really help give me the sound and response that I was hearing in my head.”

Tse’s career has been a lucrative and fulfilling one. From a self-taught young performer without a mentor to an iconic, world-renowned virtuoso of an instrument he didn’t even intend to play, his journey is one that exemplifies the creed of “hard work generates results.”

“Every coin you put in the piggy bank, so to speak, those will add up, and you can cash in when you have the chance,” Tse says. “It’s a long-term commitment, but if you’re prepared for it, you’ll succeed.”

Wisdom for Other Instructors

Tse’s advice for directors of all career paths is simple: inspire your students and set an example for them.

“Inspire them. Take them to local concerts or a recording [studio] … inspiration will always point your students in the right direction. You need to set an example for your students to follow. There’s no use talking about music all the time without being in the field. They need to see you in action.”

This article originally appeared in the 2016 Spring issue of Yamaha SupportED. To see more back issues, find out about Yamaha resources for music educators, or sign up to be notified when the next issue is available, click here.