In the past, audio networks were primarily used to create large-scale systems for commercial production facilities, schools or stadiums. Now network ports are showing up on all sorts of audio products, including those designed for use in small venues such as clubs.

Ready to learn more? Here are the top ten things you need to know:

There are many different audio networks available. Some carry as few as a couple of channels of digital audio, while others can carry as many as 512 channels. Sample rates range from 44.1 kHz to 192 kHz, but in general the channel count decreases at higher sample rates. Audio signals are treated just like data, so multiple devices can access the same audio at the same time, and simultaneously route it to different places.

2. Audio Networks Are Wired, Not Wireless

Wi-Fi® is not currently used for audio networking because it is too slow to carry multiple channels of digital audio. (This is something that will likely change in the future.) Another issue with Wi-Fi is that it is not secure from hackers or other sources of interference that could interrupt or compromise the network. Wired networks are much more secure.

Analog audio connections require one cable per audio channel but an audio network needs only one cable for many channels of audio. Most audio networks borrow Ethernet connectivity from the computer industry, using RJ45 jacks and CAT5e/6 cable for the connections. That’s why networked audio is sometimes referred to as “AoIP” (Audio over IP). However, it’s important to remember that networked audio is not Ethernet. 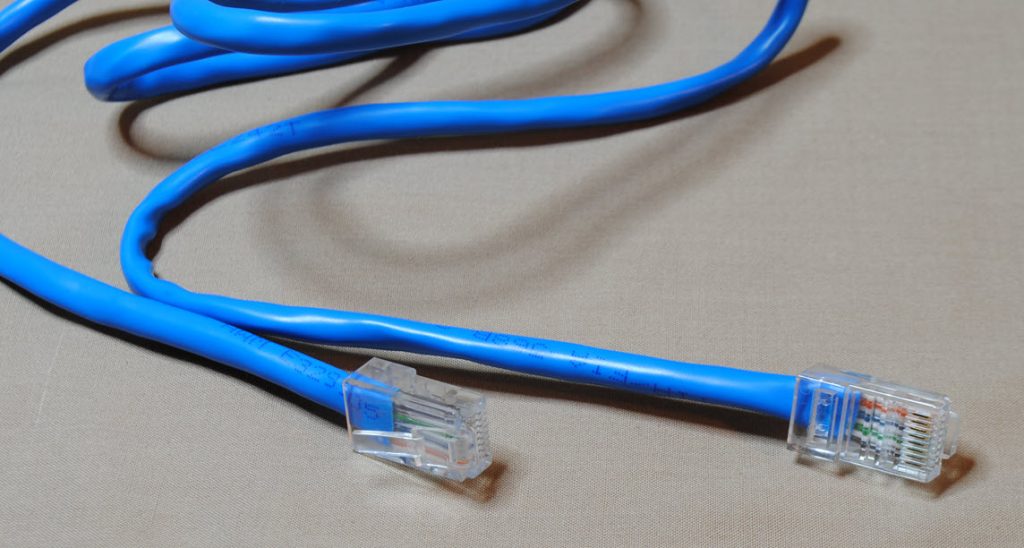 Most audio networks use RJ45 connectors.

3. Know the Difference Between RJ45 and etherCON

RJ45 connectors were originally designed for permanent installations. The etherCON connector — which is a standard RJ45 ethernet connector inside a metal XLR shell —  is a durable network connector that can stand up to the rigors of the road. You’ll find etherCON connectors on Yamaha QL and CL Series mixers. Don’t try to plug it into a microphone input!

4. Always Use an Appropriate Switch

As in a computer network, multiple audio devices are attached to the network using a network switch. However, standard Ethernet switches are not suitable for audio network purposes, so it’s important to verify that the switch you plan to use is up to the task. For example, Yamaha SWP1 Series network switches were designed specifically to reliably handle the traffic created by audio networking.

The majority of audio networks can easily distribute audio across 300 feet of CAT5e/6 cable. Since the signal is digital, the network is less likely to pick up interference from radio or TV stations, or degrade audio quality.

6. Audio Networks are Bidirectional and Expandable

Once two pieces of audio gear are networked, you can easily exchange audio in either direction without worrying about the gender of the connector. Need to change the direction of a source or reroute it to another destination? You can do so via software, without moving a single connector.

A big advantage of routing audio via a network is that you can expand your existing system simply by adding another device. For example, let’s suppose you start with a Yamaha QL1 mixer, which has 16 mic/line inputs and 8 outputs. If in the future you need more inputs, you can create a simple network by connecting the QL1 to a Yamaha Ri8-D input rack to expand the system to 24 inputs: 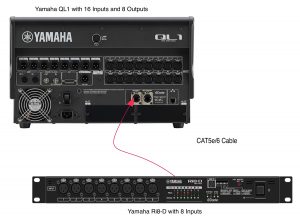 Increasing the number of audio inputs on a network by adding an input rack.

Another huge benefit of an audio network is that the network can “split” an audio signal and simultaneously route it to multiple destinations. This enables you to, for example, patch a microphone into one mixer for the front-of-house mix and simultaneously send it to a separate monitor mixer for the musician mixes. You won’t need a cumbersome analog mic splitter to accomplish this, and that eliminates extra steps in the signal path: A microphone signal can be shared by two consoles over an audio network.

Analog audio snakes (bundled cables with connectors at either end) are expensive, cumbersome and heavy. The more channels supported by an analog snake, the heavier and bulkier the cable. CAT 5e/6 cable is relatively cheap, easy to find, and lightweight so it’s easy to carry a spare snake with you to a gig.

There are dozens of different audio networks, many of which were created by manufacturers for use with their own equipment. These networks generally do not talk to each other, so until recently there was little probability that a mixing console from Manufacturer A could work on the same network as a power amplifier from Manufacturer B.

In an effort to reduce confusion and encourage communication between devices from different manufacturers, the Audio Engineering Society developed a set of guidelines a few years ago called AES67. Audio devices employing different networks but adhering to AES67 rules can work together and exchange data on the same network. AES67 is slowly being incorporated into existing audio equipment.